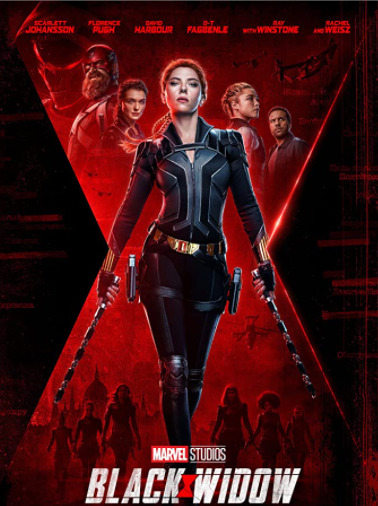 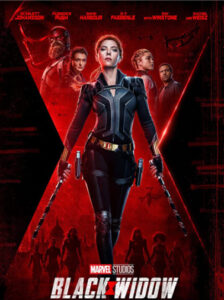 This time, we’re taking a look at the return of the Marvel Cinematic Universe with Black Widow and along the way we ask, why is Scarlett Johansson just now getting a solo film, is it possible to emotionally invest in a dead character and how does this movie set up Phase 4? Let’s dive in!

PLEASE NOTE THAT THESE NOTES MAY CONTAIN SPOILERS FOR BLACK WIDOW

The Persistent Influence of Other Films

As Sean and Chris noted during the episode, Black Widow contains an exhaustive list of other influences from past espionage films that can be exhausting to list out. The chase through Budapest contains many callbacks to films like GoldenEye, Mission Impossible: Fallout and the fight scenes are reminiscent of anything from the Jason Bourne series or from the Daniel Craig James Bond films. There is also a brief scene where Natasha is even watching the 007 film Moonraker as she’s initially in hiding (listen to our previous episode of Moonraker here).

Moonraker and the James Bond films seem to be the primary influence on the look and feel of Black Widow. The villain lives in a floating palace as he plans to infect the world with a deadly virus and the climax takes place as the heroine is falling from the wreckage without a parachute. Perhaps, the filmmakers should have taken greater care to create some original sequences as opposed to borrowing from other films.

Also, a fun fact that might have added to why these action scenes felt so bland or recycled. Apparently, Marvel special effects artists create action scenes before the scripts are even finished being written. Perhaps, that is why so much of the action in their films feels forced, bland, or nonorganic. Even if the actors wanted to add an element of improvisation it would be impossible due to the previsualized scenes. 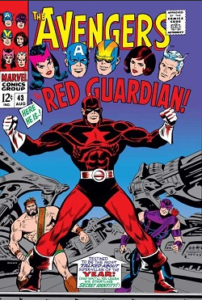 While our hosts agreed that the other characters were welcome additions to the film, they concluded that the Red Guardian is worthy

of continuing his story within the MCU. Sean and Chris agreed that the character has a rich history that could be explored. Alexi seems to embellish his time as the Red Guardian during prison when he mentions that he fought and had even punched Captain America.

This is met with some skepticism from his fellow prisoners but given how it was revealed that Isaiah Bradley served as Captain America during the Korean War in this timeline, there could have been some other covert Captain America that was operating behind the Iron Curtain during the 70’s or 80’s.

There’s also the potential of telling where Alexi came from or what his life was like after he came following the botched mission in Ohio or how he ended up in a Siberian prison. It would be nice to incorporate the other characters from the film like Dreykov or Melina but it’s unlikely a full length film could be possible but maybe a miniseries on Disney+ would be more in the cards. Given how characters like Loki, Ms. Marvel, She-Hulk and Moon Knight are getting their own series, why not give one to the Red Guardian?

It’s safe to say that most audiences can agree that Black Widow should’ve arrived earlier in the MCU. Following the events of Captai

n America: Civil War, Natasha was on the run and it would’ve made perfect sense to release this film during 2017 or 2018 within the same window as Black Panther as that film takes place concurrently with the events of Black Widow.

The character was noticeably absent in further MCU films until 2018’s Infinity War and then in Endgame, she sacrificed herself in order for Hawkeye to obtain the Soul Stone. As Chris initially noted, it was hard for him to connect to a character that we know is eventually going to die and that death creates a sadness that manages to permeate the entire film.

While Black Widow was initially scheduled for release on May 1, 2020, the film was delayed due to the COVID-19 pandemic which delayed every film in Phase 4 of the MCU. The film eventually premiered on June 29, 2021 both in theaters and on Disney+ via Premier Access. The film was a financial success as it grossed almost $370 million with $125 million of that coming via streaming. It was a mild critical success as well as it holds an

However, following the financial success of the film, Scarlet Johansson filed a lawsuit against Disney alleging that the film’s release o

n streaming platforms breached her contract that the film would receive a traditional release in theaters. While Johansson initially earned a salary of $20 million for her work in the film, she was slated to receive an additional $50 million following the release of Black Widow.

At one point, actress Emma Stone considered joining Johansson in her lawsuit as she had received similar treatment with the release of her film Cruella but that issue seemed to be settled as Stone has recently signed on for a sequel to that film. Johansson isn’t slated to appear in any future MCU films and hopefully, Disney and Marvel will do whatever they can to make this situation right.

Using our unique scale for the podcast both Sean and Chris were in agreement for their rating calling Black Widow a WOULD WATCH. The film is enjoyable overall but the many moments that are borrowed from other films seem insidious and lacking originality and the film’s second act tends to lag and causes the film to drag on until the third act and the unremarkable villain sets up the MCU for a future of subpar villains.

What did you think of Black Widow? Do you agree with our stance on Dreykov? Should Taskmaster have had a bigger role in the MCU? Listen to our episode for our thoughts on these questions as well as our choices for Red Shirts and Lens Flares and tune in next time as we return to our regularly scheduled programming with Dawn of the Planet of the Apes!