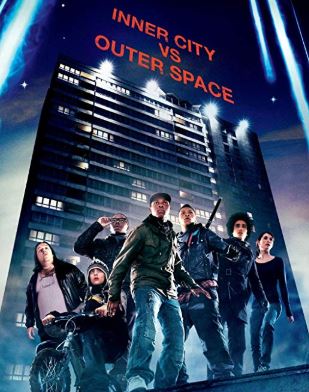 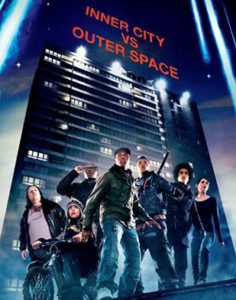 We typically think of aliens as having the shape similar to that of human
bodies with skinny arms and legs, but what about the Attack the Block alien where these
beings are pretty much animal-like. It was definitely a different take on an alien invasion
film gifted to us by Joe Cornish. Without further ado, let’s jump in to what the
Force Fed Sci-Fi team discussed this week in regards to the sci-fi film Attack the Block,
touching on the how the aliens’ appearances were developed, the amount of effects that
were used, and analyzing some of the characters!

Joe Cornish was the writer and director for Attack the Block, which was his directorial debut. The first scene shot was of the mugging of Samantha, a character who is aspiring to be a medical doctor. Cornish was actually mugged in real life, which was part of the inspiration of this film. Of course, afterwards he added his love for science fiction.

He went on to eventually write and direct the recent film The Kid Who Would Be King; however, this film was a flop and only made about half of its budget up through its box office earnings. More positively though, Cornish did contribute to the writing of the successful films The Adventures of Tin Tin and Marvel’s first Ant-Man film.

Special Effects and The Appearance of the Aliens

Due to this being a low budget film, the amount of special effects are very limited, and you could say extremely limited for being a sci-fi film. About only 100 effect shots were used.

This is definitely a complete opposite of the film that was talked about last week, George Lucas’ Star Wars: Episode I – Phantom Menace which had used close to 2000 of on-screen effects.

So where were most of the effects used for Attack the Block?

Creating the Attack the Block Alien 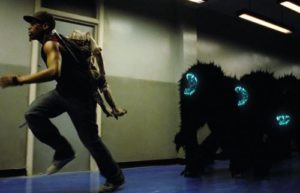 Most of the on-screen effects were used for the look of the ravaging aliens in this film. Before we talk about the effects that altered the aliens appearance though, let’s briefly mention the basics that were used.

So, gorilla-type suits were built for two people to get inside and use. Our hosts mention in our podcast episode what a pain that would most likely have been as it most likely got warm in those suits. Meanwhile, the jaws on the suits were animatronic. These were the basics that were dealt with while filming.

The appearance of the aliens came from graphics and effects later. The spiky fur was added along with the “no reflection black” the alien creatures possessed. Now, all of us here a FFSF think that these effects on the aliens were done well. For our hosts Sean and Chris, they claim they couldn’t tell that the “no reflection black” was an effect added later. I respectfully disagreed with them 🙂 In my opinion, it’s pretty easy to tell the blackest of black colors used and seen were obviously digitally added, but maybe I’m just the smartest out of all of us 😉 kidding of course.

Finally, we get the illuminating color of the aliens’ teeth. We think this was a nice add-on as it was the only color added to the appearance. For crying out loud these creatures didn’t even have eyes! If, you were in a pitch-black room and this creature decided to show their teeth, that’s all you would see … creep! But genius on the filmmakers’ parts.

Exploring the Attack the Block Characters

Obviously, the teenage gang consisting of Moses, Jerome, Biggs, Pest, and Dennis don’t come off as characters you root for in a film at first as they mug the character of Samantha. However, as the film moves along, you sort of feel for some of the life situations these kids have to deal with. They may not be completely impoverished, but definitely live in the realm of a low economic status.

Moses is played by John Boyega who has in recent years become the character Finn in the latest Star Wars trilogy, and if you didn’t know that … where have you been, living under a rock? 🙂

In any case, while his intentions at the film seem criminal and violent at the beginning, he was marked as being the main protagonist of the film right away (we may have not realized it at that point). The first alien that lands is the only female alien that arrives and it attacks Moses right away. So, unfortunately Moses first reaction is to murder it. Violence is part of his character early as I’ve said, but you may have to consider that he is the oldest of the gang and by default is the leader; therefore, he has to appear strong.

By the end of the film, he’s viewed as the opposite. He actually embraces some what of a religious figure, luckily given to us by Cornish in just the right amount in our opinion (not overdone). We know this only be two factors: 1) his name is Moses which is obviously biblical, and 2) he saves and delivers his people in almost a sacrificial act at the end to end the aliens that are left to stop their terrorizing of the Block.

The film’s character that is most focused on is Moses, but there are a few other characters to take note of.

Jodie Whittaker takes the role of the aspiring medical doctor, Samantha. She has now moved on to become Dr. Who, and most notably the first female Dr. Who, which we think is pretty cool in itself.

Getting back to her character of Samantha though, it’s clear she’s trying to work hard to where she wants to be with her life goals and the audience sort of feels bad for her when the teenage gang mugs her right at the beginning. While there is not much else to her character in this film, she does add a bit more the group dynamic.

She ultimately joins the teenage group in their endeavors to stay alive from and to kill the animalistic aliens. Whether this is a character choice or just a panicked choice, we don’t know. We all thought that she most likely had other options to consider rather than stay around the Block where the aliens are localized to. However, if she wasn’t around she wouldn’t have been able to save Moses from one of the aliens at one point.

I did feel that Moses feelings towards Samantha and vice versa did evolve over the course of the film. As we’ve covered, Moses sees Samantha thinking she’s looks entitled and is a prime target for a mugging victim and of course Samantha looks back at Moses seeing a criminal. However, as they work together, at the end of the film it seems like they respect and understand each other differently now.

Moses learns Samantha is living on the same Block and is not well off financially-wise as much as perceived and is trying to make her way to an honest living and career, while Samantha sees Moses has qualities of wanting to protect those close to him and that he does have a criminal background because he was not given the best of a family-life and living conditions.

Here’s a scene toward the end of the film where you can see Moses and Samantha beginning to understand each other:

Nick Frost (who was really the only known actor of this film at the time of its release) played Ron who seems to be the marijuana (or whatever drug it is) grower and main distributor. We loved the Addidas track suit he rocked in this film.

Portrayed by Jumayn Hunter, Hi-Hatz has been debated on whether or not he’s main villain in this film versus the murdering aliens. Even after he sees his own man mauled by one of the aliens, he seems to be somehow convinced this is all Moses’ fault. Essentially, Moses and his gang and group have to not only fight-off the dangerous creatures, but also Hi-Hatz and his crew. Obviously, Hi-Hatz’s character added another obstacle for the others who are just trying to survive. 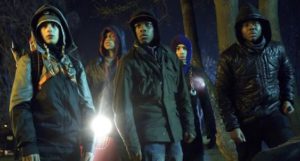 So we did disagree on our rating for this film (on our custom rating scale).

Sean and I (Jeremy) think that this film is a ‘Would Watch’ on our scale while Chris rates this as a ‘Would Own.’

Sean kept saying throughout the podcast that, hey, for a low budget film, a limited amount of effects, a decent story and performance, this film is one that should be watched at least once, and if it’s ever on television, to give it another viewing as the end-product is of decent quality and it’s entertaining. I agree with everything Sean said in regards to his rating.

Chris on the other hand, agreed with Sean and I, but would be willing to own this film in order to watch it now and again whenever he wants. In addition and while he’s not at the point where he ‘Would Host A Viewing Part,’ he would hand over his copy of the film to someone who hasn’t seen it and recommend they watch it … another benefit of owning the movie.

Make sure to listen to the full episode of the Podcast for more! You can listen to a bit more of the conversation about some of the characters, including Brewis who is based off of Joe Cornish in his 20’s! We mention who our red-shirt character is for this film along with our lens flare! As well as our ‘Who is not doing their job’ segment, which is becoming a recurrent one we may be including more often with future episodes! Finally, we touch on how we would feel about a remake or sequel since this film has obtained a cult-following, which we’ve dubbed our title idea as “Return to Attack the Block” (I think that’s got quite a ring to it)!

As always thanks for stopping by, again please listen the full episode if you have time. If you do listen, give us an honest rating on your favorite podcast platform!

What did you think of this film Attack the Block? Are you into low-budget films like this where you can appreciate the quality of art created despite the lack of a big-production film? Or are you not into these types of films quite as much? Let us know in the comments section below!