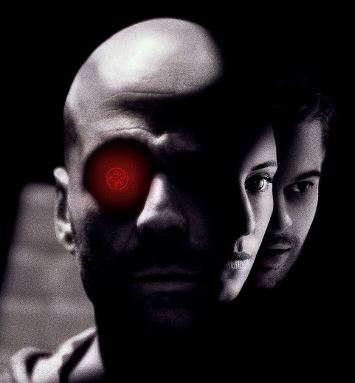 Step inside to this edition of our podcast and article by looking into a not-so-happy future as the film 12 Monkeys predicts for us while we discuss our 12 Monkeys Review, take a look at the 12 Monkeys Movie Cast, would we want to see a 12 Monkeys remake, and more!

Where Did the Idea for the Film 12 Monkeys Come From?

In short, the idea came from the French short-film La Jetée. Does that sum it up for all of you? Probably not as I’m sure most of you have not heard of that film. However, 12 Monkeys barrows the majority of elements that occurred in La Jetée in its own film. The major difference being that the post-apocalyptic world was caused by a nuclear World War 3 versus a deadly virus as 12 Monkeys portrays.

Apparently, executive producer Robert Kosberg was such a fan of the short-film, that he thought it could be made as full-feature length sci-fi film. He received the permission of the director and writer of , Chris Marker and pitched the idea to Universal Pictures, and Universal did eventually agree to pick it up.

Terry Gilliam and the 12 Monkeys Budget

Prior to this film, Waterworld starring and produced by Kevin Costner was released. Unfortunately, this film cost Universal unexpected and extra incurred expenses. As a result, the 12 Monkeys budget was set at around $29 to 30 million. In terms of producing a Hollywood Sci-Fi film, this budget was low.

Enter the director of 12 Monkeys, Terry Gilliam. Luckily, Terry Gilliam was able to make the budget work. Supposedly, he and others would go down to flea markets for some of the props and set materials and we imagine that helped keep costs low. One of the bigger accomplishments by Gilliam included the persuasion of Bruce Willis to take a pay cut! As a result of keeping to the budget, Gilliam earned final cut privilege.

James Cole, the main character was portrayed by the well-known star of Bruce Willis. Gilliam’s first pick to play this character was actually Nick Nolte. However, Universal Pictures did not agree with Gilliam’s choice which then led to Willis receiving the part. In hindsight, we think this was for the best as Nick Nolte has such a hoarse and gravelly voice (inspiration for Christian Bale’s Batman perhaps?). In any case, Willis was a better choice and played the part well as he was able to play a character who is smart and strong when he needs to be, but is also vulnerable and in-touch with himself and his emotional desires. 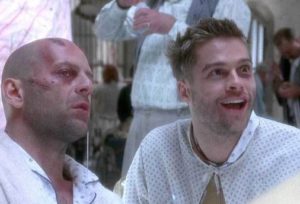 Jeffrey Goines was played by Brad Pitt in 12 Monkeys. Luckily for Universal, Brad Pitt had started to make a name for himself as prior to this film he starred in relatively successful movies like Interview with the Vampire and Legends of the Fall. Pitt did a phenomenal job as an actor in this film. He earned himself a Golden Globe for best supporting actor as well as an Academy Award nomination, but lost that to Kevin Spacey’s performance in Usual Suspects. How was Pitt able to portray a mentally ill patient so well? Apparently, Gilliam took away his cigarettes. A drastic and a bit mean way to do it, but gave Pitt what he needed as one can become shaky and shouting with nicotine withdrawal.

Doctor Kathryn Railly was portrayed by Madeleine Stowe who Gilliam met with while working on the film adaptation of A Tale of Two Cities, which was abandoned and did not come to fruition.

Doctor Leland Goines was played by the famous Christopher Plummer, who was not in this film a whole. We did feel like his character wasn’t needed as it didn’t add much to the film. We also are kind of wondering, why a southern accent in the city of Baltimore for this character? I suppose you can create whatever kind of character you want, but sort of pointless in our opinion.

Is it possible James Cole was really hallucinating? 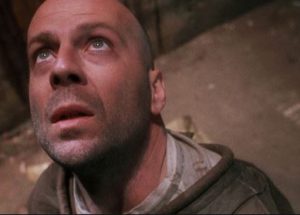 This is a topic that is discussed in our podcast and it is interesting to reflect on. On the one hand, you have James Cole’s accurate play-out of the “boy down the well” as mentioned on the news in one scene. In addition, there is that picture of him being briefly trapped during World War 1 that Dr. Railly possesses. The one element that brings us to having a bit of doubt is the voice of a man Cole hears throughout the film: while strapped to the bed when brought back to the future, talking with a homeless man that Railly tries to talk to again later, but doesn’t have any recollection of speaking to Cole, and opening the door to a man in the bathroom stall he thought was talking to him.

We tend to think that all of this wasn’t just inside of Cole’s head of his. There are more elements supporting that Cole is from the future than him being mentally ill. However, you could argue that both are happening as I’m sure time travel with a stressful mission could mess with the mind!

Should 12 Monkeys be re-made?

We simply are going to just say “No” to this question. We’re sure that there are some talented people out there in Hollywood that could probably come up with a quality re-make. However, it would be a re-make, of re-make (if you consider the short film). In addition, a television series was made that took on the same characters and told different stories over 5 or 6 seasons I believe. Finally, Sean points out that the 90’s was a perfect time to shoot this film instead of now or when the technology of filmmaking advanced that it would be heavily CGI’d these days.

When you think of well-done sci-fi films, 12 Monkeys should be a worthy inclusion. It contains a post-apocalyptic world storyline with time travel and flows smoothly between the past and the future so the audience doesn’t become confused. In addition, Willis’ performance is commendable plus a phenomenal performance delivered by Pitt. With that being said, it presents an extremely bleak outlook of the future. Not that this theme lowers the quality of the film, but it does play into whether some may really want to own this film. Therefore, this film we rate as a Would Watch on our scale. It’s worth a watch at least once, especially if you’re a sci-fi fan, and if you ever catch it on television (which is rare in my experience), you might put it on to remind yourself about the unique story 12 Monkeys tells.

Thanks for reading! If you haven’t gotten a chance, take a listen to the whole podcast episode! While Chris and Sean talk about the topics above, you’ll get the Red Shirt of the film, Chris’ love for Bruce Willis’ butt in this film (not really), and more!

So what did you think of this film? Do you think James Cole was hallucinating the whole thing? Do you think Brad Pitt should have won the Oscar for best supporting actor? And how worried would you be if a potential human-ending virus broke out? Leave you thoughts and comments below!